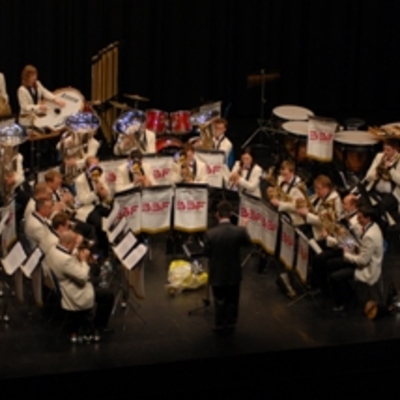 Blasmusik, Brass, Fribourg – Founded by Louis Graz and a few musiciens from Broye, the Brass Band Fribourg was born in 1970, in Estavayer-le-Lac. It's name at the time was «... Read Biography

Founded by Louis Graz and a few musiciens from Broye, the Brass Band Fribourg was born in 1970, in Estavayer-le-Lac. It's name at the time was « Ensemble Broyard d'Instruments de Cuivre » (E.B.I.C.). After being conducted during ten years by its founder Louis Graz, the E.B.IC. was conducted successively by Jean Balissat, Marcel Zumbrunnen, Jean-Pierre Chevailler and Jacques Aeby.

The constant increase of musicians coming from the region of Fribourg incited the managers of the E.B.IC. to take the head office closer to the capital and to the conservatorium, high-place of musical learning. At that time, a change in name was necessary. Therefore, in 1986, the E.B.I.C became the Brass Band Fribourg.

Since 1988, the BBF has had five conductors: Jean-Claude Kolly (from 1988 to 1995), Pascal Eicher (from 1995 to 2001), Philippe Bach (from 2001 to 2002), Arsène Duc (from 2002 to 2008) and Vincent Baroni (since 2009). Every year, in addition to the concerts given by invitation or on its own initiative, the BBF takes part in two major national-wide contests, namely the Swiss Open Contest in Lucerne and the Swiss Brass Band Contest in Montreux. It obtained a few results worth being mentionned. In 2000 and 2001, it was named vice-champion before conquering its first swiss champion title in 2002. That victory allowed it to take part in the prestigeous European Brass Band Championships in Bergen (Norway), the 2nd and 3rd of May 2003, where it obtained a magnificent 6th place. In 2005, the Brass Band Fribourg confirmed it really belonged to the elite of brass band in Switzerland by winning the Swiss Championships a second time. In it's second participation to the European Championships, in 2006 in Belfast, the Brass Band Fribourg obtained the european vice-champion title, best result ever obtained by a swiss band. The 25th November 2007, the BBF became swiss champion for the third time in six years. In May 2008, the BBF obtained the 4th place in the European Championships in Stavanger (Norway).