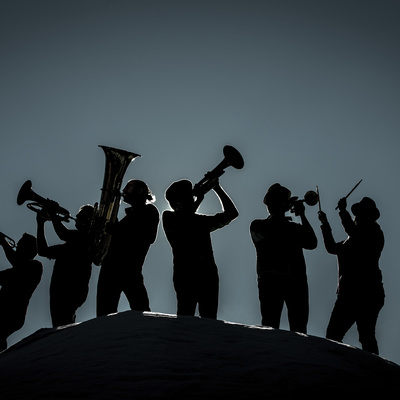 Blasmusik, Andere, Bern – With virtuosity und precision, the Molotow Brass Orkestar from Bern, Switzerland manages to create party vibes as soon as they get on stage. The... Read Biography

With virtuosity und precision, the Molotow Brass Orkestar from Bern, Switzerland manages to create party vibes as soon as they get on stage. The six conservatory-trained musicians, five brass players driven by their power-girl on the drums , play traditional music from the Balkans, which they mix with Swiss folk melodies. But more and more, the band integrates their own original music in their repertoire. Today, the Molotow Brass Orkestar rocks even more than it did at the beginning.

The band’s history starts in 2007 at the music university (Hochschule der Künste) in Bern, Switzerland. The six music students had in common the wish to break out of classical concert routines and soon formed the Molotow line-up, which has hardly changed since then. Tenorhorns were replaced by basstrumpets, and the more brilliant-sounding trumpets took the parts where flugelhorns had been used historically. The group’s sound has adapted to the rock influence which comes from the members own musical creations.
What started fast and furious, still develops and grows. Over the years, the Molotow Brass Orkestar has played at such prestigious places as the Durham Streets Summer Festival (GB), Spettacolo Brunnen, Lucerne Festival, European Brass Band Championships, Fêtes de Genève (all CH), Stadtspektakel Landshut (D), Stramu Würzburg (D), has rocked the crowds in the most important clubs in Switzerland and has played at countless private events in all possible and impossible places, such as bars, villas, restaurants, cellars and storehouses.

The band is part of the soundtrack of three movies and our music is played by radiostations on three continents.
The first album „Molotow Brass Orkestar“ was released in 2010. Mostly filled with traditional songs, the band changed its direction to self-composed music on its second record „Asoguet“ in 2012. This development is even more evident on the actual album „Schaubeschad!“, which has almost only original music on it. The band’s eight years of experience is obvious on this new disc, which was recorded, mixed and mastered at Trixx Studios in Berlin, Germany in 2014.