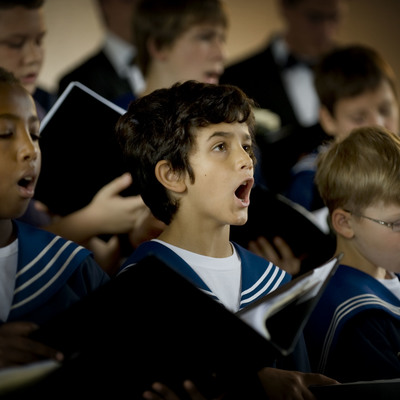 Chor, Kinderchor, Zürich – The Zurich Boys’ Choir was founded in 1960 by its choirmaster Alphons von Aarburg. Nowadays over 100 boys from all walks of life and from all... Read Biography

The Zurich Boys’ Choir was founded in 1960 by its choirmaster Alphons von Aarburg. Nowadays over 100 boys from all walks of life and from all religious backgrounds belong to the different sections of the choir. The choirboys, who come mainly from Zurich and its surrounding areas, meet twice to three times a week for musical training and rehearsals. They are also encouraged to participate in the twice yearly Singing Camp where rehearsals and fine-tuning of the repertoire takes place. The choir is not attached or affiliated to a college or a boarding school and it exists thanks to the power of enthusiasm and the love of music of its young members and their families.

The career of a Zurich choirboy begins at the Singing School, where 6 to 8 year olds are given their first exposure to classical music theory. In the Main Choir, the boys are then taught an extensive repertoire of music, which they will eventually perform – as the crowning glory of their career thereafter – in concert or as part of the Touring Choir. Later, after their voice has broken and established itself, the boys can become members of the Men’s choir, which is affiliated to the Boys’ choir, if they are interested in pursuing their singing.

The Zurich Boys’ Choir has toured all over Switzerland, has been to the Czek Republic, Russia, Italy, Belgium, France, Germany, Hungary, Bulgaria, Austria, Finland, The Netherlands and Portugal.
The tremendously successful concert tour of the USA is especially worth mentioning in this context.
EducationDirection

Over the years, the choir has worked together with renowned conductors such as the likes of Herbert von Karajan, Niklaus Harnoncourt, John Eliot Gardiner, Franz-Welser Möst, Charles Dutoit, David Zinman, Roger Norrington, Christoph Eschenbach, Armin Jordan, Gerd Albrecht, Alain Lombard, Ferdinand Leitner and many others. In the spring of 2009, the Zurich Boys’ Choir went on tour in China with the Zurich Chamber Orchestra under the leadership of Muhai Tang. This was the very first time Josef Haydn’s Oratorium “Creation” was performed in the land of the rising sun and it was highly acclaimed by an enthusiastic audience of Chinese citizens. The choirboys have also been invited to sing at the renowned opera houses i.a. in Zurich, Strassbourg, Metz, Shanghai, Salzburg (at the Festspielhaus in Puccini’s “Tosca”, at the Easter Festspiele in 1988 and 1989 with Herbert von Karajan).
They have also performed with the Munich Chamber Orchestra under the leadership of Christoph Poppen. 2015 the Zurich Boys' Choir participated, on invitation of the Toelz Boys' Choir (Tölzer Knabenchor), together with the Wilten Boys' Choir at the exclusive International Toelz Boys' Choir Festival.

Registered since about 6 years
Last login on